I just read another Facebook post by someone who has been injured and has been unable to exercise. I get it; I’ve been there. Using injury as a crutch to be fat was a specialty of mine (I’m not implying that the person making the Facebook post was doing this. I used to do that!). What made me sad was that this person still believed that exercise was the key to weight loss.

I know this is a fact because I lost 110 lbs in one year without exercise. You read that right. I did nothing. Sure, I dabbled here and there with some physical activity, but nothing regimented and definitely nothing that would make me sweat. I only recently began doing push ups daily, but that’s a far cry from an exercise regimen. I’m working up to it, and I’ll get there someday (soon, I hope!), but for now, I’m still living an exercise-free life and still losing weight.

If you’re putting off losing weight because you think you need to exercise, stop. Stop buying into the hype and marketing that losing weight means sweating. It does not. Not even a little. “But I know people who have lost weight by exercising!” you’re thinking, and you’re not mistaken. People who exercise tend to eat better and pay attention to the quality of the food they are putting into their bodies. My sister is phenomenally fit, and she eats foods I would never even consider eating, but she eats them in very small quantities and she also exercises more than 90% of exercising people I know. Not only is she limiting her caloric intake, but she’s exerting far more than the average gym rat.

“So you’re saying that I can lose weight just by eating certain foods?” YES I AM! I did it. Look at this picture of me before and after. Bear in mind that the only difference between the two photos is 10 months and a different diet. 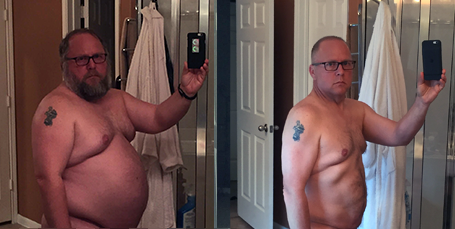 No, I’m not skinny (yet!), but I’m no longer obese. Also, I didn’t do some sort of weight loss diet like Adkins or the Cabbage Soup diet. I changed my eating habits and adopted the Paleo Lifestyle after doing a Whole30.

I’m not taking anything away from those who love to exercise, or who use exercise to be fit. I just don’t want anyone to believe that if you can’t exercise, you can’t lose weight, or worse, if you don’t exercise you won’t lose weight. That’s complete BS, and I’d be very incredulous of any fitness “Expert” who tells you that working out is the only way to lose weight. I’d stay very clear of anyone who spews that BS.

Take it from a guy who lost 110 lbs in one year without exercise: change your diet, eat healthy, and just get up and move a little, and you will lose weight.

Former active duty Marine who went from 170 lbs to 328 lbs and decided that he had to change his life or die. He lost 130 lbs in 1 year through Whole30 and adopting the Paleo Diet without doing any exercise at all. Since starting running, he's lost an additional 20 lbs and is comfortably back in the 170 lbs range. He is a Warrant Officer in the Army National Guard and writes multiple blogs about topics he is passionate about.